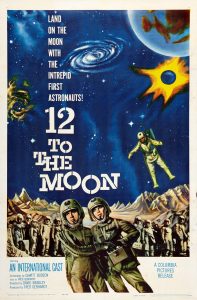 This film remains rather stilted and slow-moving and that’s not a good thing in what is essentially a 1950s style Rocketship B-Movie…it has many of the trademarks common to those…hurtling meteor storm attacks!, silly and impossible solutions to every problem usually involving shooting a rocket at something else and an intergender crew(although this one also has the daring for its time interracial crew!)…the problem with this film isn’t its story really which could have been fun but the fact we see so little of what we hear about after the fact..more on screen adventure would have been a tremendous help..the gay undertones present in this film are also disturbing and sometimes laughable(although how else could the subject have been brought up in the time?). Still deserves points for being so daring.