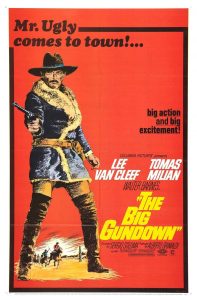 This is absolutely one of the best so-called spaghetti westerns ever, after Sergio Leone’s films of course, and it rates very highly among all westerns. Unlike many other non-Sergio Leone westerns, the cinematography, camera-work, etc., are all very good and some scenes are very artistic and even worthy of Leone himself.

Lee van Cleef is excellent as the pseudo-lawman/bounty hunter with integrity who believes in “justice” and “progress” for society.

Ennio Morricone, as usual, provides a great score for the film. The song is rousing, while the music for the chase scenes is excellent. Morricone also does a folk-music/square dance version of the theme for the wedding party, which is a neat touch.

The story is interesting and well-developed, as well. In its full-length version, it is in fact somewhat deep, with van Cleef’s Corbett being a fairly complex character who undergoes a significant character development in the course of the film. In the abridged American version, unfortunately, he is shown as simply bounty hunter who mercilessly kills all before him in cold blood, who never bats an eye at his job, making his character two-dimensional and making the end more flat, more perfunctory, and less convincing or meaningful. In the full-length version, though, he cares about justice, gives outlaws a choice (and a chance), and there is significant development on how he becomes so obsessed with finding Cuchillo that he crosses the boundary between justice and personal obsession. He then re-examines himself and the events in which he finds himself to come to a significant realisation near the end.