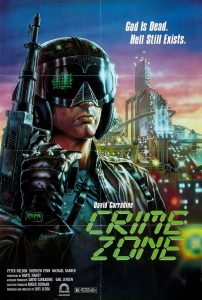 An agreeably stark and rough post-apocalyptic little Sci-fi b-grade film by Roger Corman’s Concorde productions, which depicts a neon-glazed future where citizens are put into categories as they carry out daily routines, are run by strict rules (like state-sanctioned sexual activities), cameras watch their every move, the rich extend their existence in the Garden of hibernation and they’re governed by a power-hungry state where a mighty police force keeps order. This follows two young love-birds going against the trend, by taking up an offer by a stranger to steal some important computer chip where in doing be free of the strangling reign of the dead-end zone. But things don’t go to plan, where they are caught up in a web of murder, mystery and intrigue. So now they are on the run. This is what you can call an grimly futuristic twist to Bonnie and Clyde in a post-world war three society. Quite formulaic, but it does offer up an ambitious surprise or two with its sharply written, if elaborate screenplay. Director Luis Llosa remarkably keeps a fast tempo, delivering impulsively edgy action sequences, efficiently workable special effects and getting atmospheric vigour out of the smoky low-rent sets. They do look dingy, but it brings an authenticity about its war-torn decay. An arrestingly foreboding synthesizer score only adds to the steamy humidity. The performances are quite impressive. Peter Nelson is ably good with a very delectable Sherilyn Fenn as the young on-the-run couple Bone and Helen who are dreaming of a better life and to get that the rules are to be broken. Because they wouldn’t kiss ass. The collectedly smooth David Carradine (who also was one of the associate producers) goes about his business in a very cunning manner. Then there’s durable support by Michael Shaner and Orlando Sacha. By-the-way kick-ass cover artwork too.