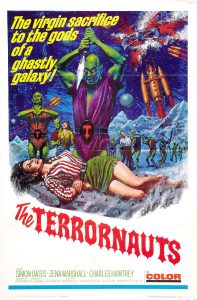 Amicus were a well-known film company during the 1960s and 1970s who made a number of anthology horrors that continue to be well-regarded amongst fans. It transpires that they tried their hand at a number of other genre efforts during that time-frame too, including this ultra-low-budget sci-fi effort.

Sadly, THE TERRORNAUTS turns out to be one of the cheapest and silliest British science fiction films ever made. It has good pedigree; after all, Amicus is behind it, and their DR TERROR’S HOUSE OF HORRORS, made 3 years previously, is still one of my all-time favourites. This film is based on a novel by the one-time hugely popular Murray Leinster, and has a script by respected sci-fi writer John Brunner. What could go wrong? Er, everything, as it happens. This is a cheapo production with wobbly sets and production values which are far below par. It actually looks cheaper than the episodes of DR WHO that they were shooting at the same time. The basic storyline sees a group of astronomers getting involved with a planned alien invasion, but the outer-space special effects look like something you’d see in THE CLANGERS. It’s hardly the stuff to give George Lucas nightmares.

The cast turns up a few faces of interest, most notably Charles Hawtrey and Patricia Hayes who make up a kind of comic double act to comment on the action. Despite the limitations of his acting style, Hawtrey is the best thing in this – well, him and the beautiful actress Zena Marshall, one-time Bond girl (in DR NO) and now reduced to making this nonsense. Unfortunately, the male leads are resolutely dull.

I still laugh even now when I think about the Robby the Robot rip-off that rolls and wobbles all over the place as well as the dodgy explosive effects and the green-skinned aliens who look like they’re wearing bath rugs on their heads. As an unintentional comedy, THE TERRORNAUTS is a lot of fun, just as fun as all those dodgy sci-fi B-movies that got made during the 1950s. But as a proper film it’s a real mess.