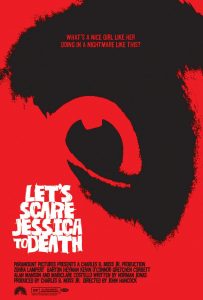 I wouldn’t expect such a luridly titled horror film to be as multi-layered as LET’S SCARE JESSICA TO DEATH is. JESSICA is first and foremost a psychological drama of rural paranoia but the marginal use of the living dead in the final act (or at least a vague version of them left unexplained by the film) is worth noting for one reason: the ‘living dead’ films (and I use the term very loosely here) that followed in NIGHT OF THE LIVING DEAD’s wake in the early 70’s were a lot more interesting and innovative (even if the executions often left a lot to be desired) than the typical “zombie” flicks that followed DAWN OF THE DEAD and more or less solidified what a ‘zombie flick’ is supposed to be.

What distinguishes the two eras is the bitter aftertaste of the hippie dream gone bad, the chemical hangover of the age of Aquarius crushed under the weight of its own hopes, one tab of LSD at a time. The titular heroine in JESSICA is taken to a remote countryhouse by her musician husband and his friend, to recover from a psychotic episode she suffered six months ago in New York. On arriving in the small village, they are greeted with hostility by the creepy old men that inhabit it (“damned hippies!”), and discover a young girl living in the house. They invite her to stay with them for a while but she quickly becomes romantically entangled with both men, while Jessica spends her time trying to hold onto her sanity which is not helped by apparitions of a girl in a white gown.

JESSICA at its heart is a moving psychodrama about a woman trying to hold onto her sanity as the world around her bears her false witness. When Jessica discovers the young girl living in the house but still needs her husband’s confirmation that the girl is real and not a figment of her imagination (“it’s okay, I saw it too Jess”) we realize she’s “broken before a frozen god” (to use Cormac McCarthy’s words).

But even in 90 minutes running time, relatively unknown director John Hancock finds place in his movie for commentaries on small-town hostility, extra-marital drama, post-hippy broken dreams (the two men and Jessica arrive in the small time driving a hearse with the peace symbol stenciled on the side) and an intriguing mix of ambiguous supernatural horror and psychological drama that recalls some of the best moments of the genre, from THE HAUNTING to the works of Jacques Tourneur in the 40’s. As Jessica mutters to herself in one of the many monologues delivered with a close-miked intimacy that almost makes us voyers of her psyche: “Madness and sanity, dreams and reality. I don’t know which is which.” If there are plot inconsistencies and threads unresolved (not least of all the white-gowned girl – which was added on the script on demand by the producers), they are overshadowed by the mesmerizing effect of the entire movie. Pivotal in the film is Zohra Lampert’s stunning performance as Jessica, carrying with her the fragile air of a person who is trying to pass for normal but also a genuine love for life. As with Robert Altman’s heroines in his psychodrama 3 WOMEN, Hancock has only sympathy for Jessica’s drama. To quote Stephen Thrower, “Jessica walks with the gauche fragility of a doll hoping to pass for human; her movements are cautious re-enactments of grace, an approach well suited to the role of an intelligent, sensitive woman recovering from a nervous breakdown”. It is truly an Oscar-worthy tour-de-force and definitely far and above the acting usually associated with low-budget horror films.