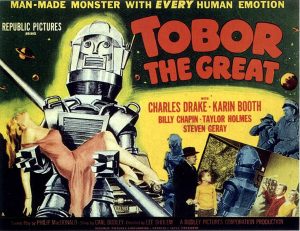 Watch this one with child-like eyes and you’ll have a great time. Tobor (‘robot’ spelled backwards) is the invention of an elderly scientific genius who develops a robot to serve as the pilot for dangerous space flights in place of human astronauts. The inventor’s grandson (Billy Chapin) befriends the robot during the development of its complex brain and artificial personality. Commie spies kidnap the inventor and the boy, attempting to get their hands on the valuable robot.

Tobor is incapable of speech, which gives the robot an interesting quality of mystery and strangeness. But he does have the ability to sense human thoughts and emotions. In other words, he can tell when someone is up to no good!

In the climax, Tobor has to break out of his own lab to rescue the boy from the evil commies who kidnapped the youth to gain control of the robot. Although Tobor is less agile that a human being, he moves around much better than Robby or Gort — which comes in handy when Tobor has to lift the back end of the bad guy’s car and prevent them from escaping!

Tobor’s physical design is pretty impressive. Although it doesn’t have the aesthetic appeal of Robby or Gort, he is solidly constructed and a pleasure to watch in action. The movie includes a scene in which the inventor opens up Tobor’s chest to show his interior to a group of reporters at a press conferences when Tobor is presented to the public. Obviously the reason for the scene is show the audience that this is no mere suit with a man inside. It’s a real robot!

It’s a nice little touch in a movie designed to inspire younger viewers . . . and to entertain older ones.

‘Tobor the Great’ is a terrific kid’s-fantasy-come-true story. Admitttedly, the direction by Lee Sholem is decidedly unskilled, and young Chapin is a mediocre actor at best (he’s no Michel Ray of ‘The Space Children’, I’m sorry to say), but Charles Drake (‘It Came from Outer Space’) holds his own as the boy’s father. William Shallert (‘The Monolith Monsters’ and several other 1950s classics) plays one of the reporters in the scene mentioned earlier.