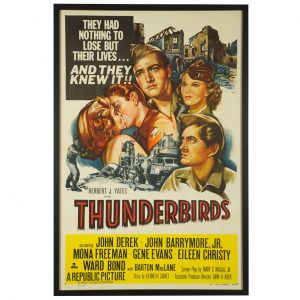 Thunderbirds is a tribute to the war service of the Oklahoma National Guard which was activated in 1940 before America’s entry into World War II and the action they saw.

The film which nicely blends in actual battle footage with the ensemble cast focuses on two members of the Guard who were members of the Osage Nation in Oklahoma John Derek and John Drew Barrymore. When they are activated and the guard mixed in with other troops the whole film starts to look like an updated version of The Fighting 69th.

The top sergeant of the regiment is Ward Bond. He’s carrying a deep dark secret from the first World War and no pun intended a bond with Barrymore that John Drew knows nothing of. It’s the main plot line of the film.

Some good and believable characters blended in with clichéd military types you find in most war films of the era.