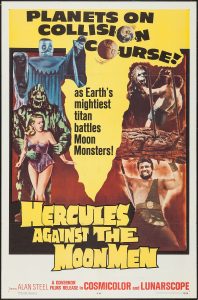 This is more of a sword and sandstorm movie than peplum and sci-fi mix because you rarely see the aliens, only the effects and problems they caused good ol’ Hercules. Don’t expect to see Hercules physically fight the moon aliens because he doesn’t. He does however fight their powers and their rock men army.

The film is barely mildly entertaining to watch normally – but if you watch in fast-forward it’s pretty funny. Watch it in fast motion when Herc is strapped to the spikes… he looks like he’s almost hyperventilating. Ha-ha.

The ending really is “sandy” as other have mentioned. I didn’t find as bad as some of the other reviews read but it is truly one heck of a sandstorm.