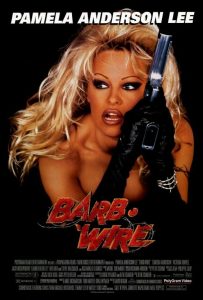 A sort of remake of Casablanca set in the future and in a strip club? Pam Anderson is Barb Wire and she must help someone get on a plane to Canada, with contact lenses. Whatever else the plot is, do people really care?

This film was made, marketing and watched because of one thing and one thing only, Pamela Anderson. This was her naked sci/fi Hollywood film, the opening of the movie shows her stripping, showing her breasts and getting hit with water. Ooooh, so sexy. This was probably the one scene many kids watched over and over. The film itself is regarded as one of those, it’s so bad it’s good. I can totally see that and once I got pass Anderson’s wooden acting, I actually enjoyed myself. Guilty as charged.

I said I would have loved this when it first came out. I say that because I was around 10 years old and a film like this, that is drenched in so called “sexiness” would have been imprinted on my mind. Seeing it for the first time in full when I’m 22, went to film school and have been on the internet since I was whatever age, the film doesn’t strike me as sexy. Anderson does look good though and seeing her prance around in tight leather doesn’t hurt either. Much better than what Halle Berry tried to do with Catwoman.

Jango Fett from the Star Wars prequels is in this film, I found myself saying “Hey it’s that guy” a lot every time a character came on screen. The film is campy, what else do I need to say? The acting is campy, the script is god-awful and taken from Casablanca, the nudity isn’t even that good. I expected more, the film feels like a tease.

Barb Wire is like Showgirls. Made to appeal to the perverted crowd, only this one has explosions. I’m giving this one a high rating, for it’s campiness feel. It’s trash, but golden trash.