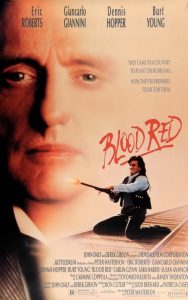 The acting talent speaks for itself: Eric and Julia Roberts, Burt Young, Giancarlo Giannini, Elias Koteas, Michael Madsen… The cinematography by Toyomichi Kurita is beautiful. Themes: Late 19th century California, the beginning of wine culture, immigrant vs. business interests, William Jennings Bryan populism vs robber baron statism. All the tools are there for a great film.

The Bad: The screenplay is the problem. It needed a page one rewrite from someone who could write dialogue, and who could write scenes to emphasize the political, religious, and economic issues of the period. The characterization is almost non existent, with only Giannini’s part getting some depth. There is so much wasted talented in this film. Usually Eric Roberts is criticized for overacting, but this picture could have definitely benefited from his passion. Also the music by Carmine Coppola is so old-fashioned and silly that it borders on soap opera cues.

The first half will keep your attention. After that, it becomes boring. Bad dialogue, bad music, and pedestrian mise-en-scene kill the movie. I was actually rewriting the scenes in my head as I was watching the film.