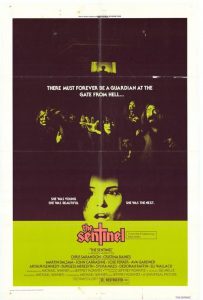 Bored with the normal, run-of-the-mill staple films to watch this Halloween that I’ve seen over and over again, I took a chance on “The Sentinel”, hoping it could get my horror juices flowing again. Mind you, I had just come back from seeing the Dark Castle remake of “The House on Haunted Hill” – complete and utter crap. Thankfully, “The Sentinel” BLEW ME AWAY! In a riviting story about a model who moves into a creepy building in Brooklyn Hights, the film offered everything that I hope to find in a good movie – (1) Campy and fantasically juicy characters, exchanges and dialogue, including hilaraious turns by Christopher Walken, Jeff Goldblum and especially, Martin Balsam, as an absent minded professor – (2) Horrifying Terror! Not to give a frame away, but there are scenes in this film that chilled me to my pancreas – (3) Fantastic gore, terrific make-up and wacky (if very uneven) direction from Michael Winner, which flows rather nicely with this unreal treat. If you loved “Evil Dead 2”, “Dead Alive” and “Deep Rising” – this will be your queen of favourites. Just to emphasize my love for this film – after I watched it for the first time, jaw-dropped, I rewound it and watched it again. It is now one of favourites of all time. Do yourself a favour and check it out!