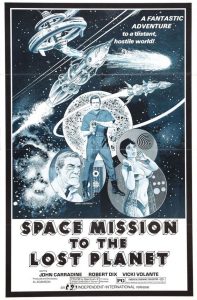 Horror of the Blood Monsters is truly a crazy film. It’s a biscuit-taking exercise in Z-Grade film-making of the variety that makes you say, ‘I cannot believe they did this!’. It’s a curious mixture of ineptness and experimentation that results in a somewhat unforgettable cinematic experience. Whether that’s a good or a bad thing is entirely down to your tolerance for premier division crapola.

As has been stated many times, the film incorporates segments from a few old movies, including a Filipino caveman adventure and dinosaur film. These are linked together (loosely, to say the least) by sci-fi and horror sections, which in themselves don’t seem to be connected very well either. In other words, it’s a shambles. By, my word, it’s a fun shambles to watch.

The story is half-hearted at best. The film-makers certainly didn’t treat it with very much importance, so neither will I. Instead, I shall give a stream-of-conscious list of things that this movie contains.

We have vampires with plastic teeth. We have narration by a madman called Brother Theodore. We have a mission-control that is run by a man and a woman and a bloke with a clipboard. We have a chain-smoking space crew lead by an ancient doctor played by a (drunk?) John Carradine. We have a space-ship made out of a bottle of detergent, the interior of which consists of a table and two extremely uncomfortable looking wooden deck-chairs. We have special-effects of the special-needs variety  the outer space scenes would look unrealistic in an episode of The Clangers. We have an elephant with door-mats stuck to it, crap dinosaurs and space gazelles. We have crab-men, bat-men, snake-men and midgets. We have a war between good cavemen and vampire cavemen. We have a cave-woman who changes race depending on who she is on screen with at a given time. We have morally dubious brain-surgery, performed in order to allow for inter-stellar communications. We have epic battles of extremely badly choreographed proportions. We have a space age psychedelic sex machine. We have an alien atmosphere that changes colours constantly in order for the movie to incorporate old black and white footage seamlessly with the colour bits, or because of radiation or something. Generally speaking, we have a lot of things going on in this movie.