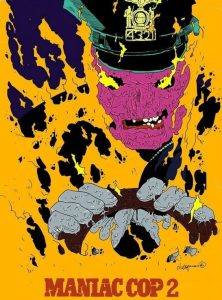 The film starts off with a recap of what happened at the end of the original Maniac Cop and this leads to the police force believing that Matt Cordell drowned and his body got washed away. Well, they are wrong as he is back on the streets of New York doing what he does best, by seeking revenge on his fellow officers, unexpected citizens and on those crooked authorities who framed him. But his not alone on this crusade, as he’s joined by a jolly serial killer. So, it’s up to detective Sean McKinney and police psychologist Susan Riley to put a stop to this macabre madness.

“Maniac Cop 2” is a pearler of a trashy sequel that’s just as dark and entertaining like its predecessor maybe more so. Although, I probably like the original a tad more. But what makes this one a little more exciting is that it goes for more expansive and quite highly energetic action set-pieces. They seem to up the ante and nihilistic violence within each scene that follows in such a rapid pace. We can thank this winning formula to the pairing up again of director William Lustig and writer / producer Larry Cohen who did a really fine job on “Maniac Cop”. The story by Cohen treads the same path as the original, but gladly along the way it adds in some refreshing developments to make it stick out from a usual carbon-copy sequel. He puts forward a lot of the focus on the mysterious back-story and the motive behind all of this chaos that leads Cordell doing bad deeds and taking the criminals’ side. Also evident in the script is plenty of black humour and sardonic wit that mixes well with the grungy and dry dialogues. Just like the first there is also a social commentary lurking about on how corrupt and weak the decaying justice system is and the foolishness of these higher superiors, but all of that is overshadowed by its exuberant and quite meaty stunts. And of course it seems to play the terror of this novel idea more for fun and it works out for that reason alone.

Obviously that’s the reason for Cordell getting himself a partner. Quite an eccentric and clingy, non-stop chatterer was this serial killer who was played superbly by Leo Rossi. Compared with the silent, brute sized zombie figure of Matt Cordell that emitted such an eerie tone played by the dominating presence of Robert Z’Dar. They were definitely the odd couple! Robert Davi paints an convincing performance as the hard-ass detective Sean McKinney who’s on the trail of Cordell and Claudia Christian is equally good as police psychologist Susan Riley. Bruce Campbell and Laurene Landon feature again from the first flick to come up with rather small roles on this outing. Michael Lerner is excellent as the slimy Commissioner Edward Doyle and there’s some quick scenes with Charles Napier, Sam Raimi and Danny Trejo.

Director Lustig manages to grab you with some well set-up explosive thrills (like the terminator style slaughter of a police station) and he makes the most out of the very grimy and atmospheric backdrop of New York. The seedy night scenes really creep up on you with what’s lurking in the shadows and the lighting composition is handled very well. When the film what’s to be creepy the score ranges from a chillingly, whisper with the odd chant and whistling tune, but when it kicks into gear so does the score with an thumping and quite jarring arrangement. It’s not a particularly gory film, but there’s a big body count and the deaths are extremely violent. The makeup effects are quite superior with Cordell’s face looking horrendously, hideous and that’s a good thing as he looks dead. In all it mostly delivers on the very important staples that’s makes this trash enjoyable.