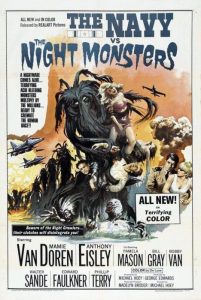 The Navy Vs. The Night Monsters is basically The Thing From Another World Meets Day of the Triffids. If you like either of those movies, you might like this one…or you might hate it even more for stealing plot elements from both those movies and executing them badly. A plane carrying a load of specimens from the Antarctic crashed on a South Seas naval base and a horde of long-dormant killer plants is released.

My biggest complaint is that this movie would have been better in black and white. The monsters are basically a dark black color anyway, and a lack of color has never hidden Mamie Van Doren’s…umm…charms…before. I think black and white would have improved whatever atmospheric quality the director was reaching for as well. The way it stands, the film reminds me of something Sid Pink directed.

The movie has all the standard and rather-cliched characters you would normally find in a 1950’s monster movie. Unfortunately, this film was made in 1966. No explanation or reasoning is ever given for the homicidal and suicidal fits that the pilot is prone to…he spends most of the movie laying in a hospital bed or choking people.