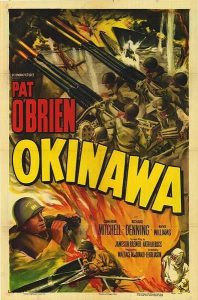 The battle for Okinawa in the Ryukyu Islands just south of Japan, trailing off Kyushu like a jet stream was the final battle of World War II in the Pacific. Commanding the Navy Task Force was Raymond Spruance the victor at Midway and it was the largest flotilla ever put together, over 1500 ships. Not to mention the Army and Marine forces who did the fighting on land. As this was Japan’s back door so to speak they fought with ferocious intensity with full use of the Kamikaze suicide planes.

The story of Okinawa needed an epic film like The Longest Day. Instead we got a hastily put together film with a lot of cliché stock characters from war films of the era. Pat O’Brien stars as the skipper of the destroyer on which this film’s story is told and Richard Denning is his executive officer.

They may be top billed but O’Brien and Denning take second place in screen time to the crew of one of the naval guns on the destroyer. The crew consists of Rhys Williams, Richard Benedict, James Dobson and Cameron Mitchell who dumbed down his command of the English language to the level of Leo Gorcey. The crew is mostly sitting around waiting for the Kamikaze attacks which they know will come.

Okinawa is not a horribly bad film, but with an epic title like that it sure falls short of the mark. The Army, Navy, and Marines who fought there deserved something much better.