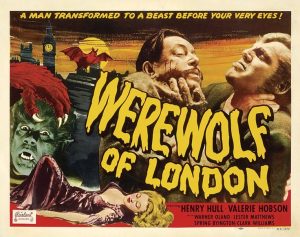 Universal’s first ‘werewolf’ movie & oddly enough one of the least celebrated in the studio’s library of classic horror films, due in large part to a later vehicle titled ‘THE WOLF MAN’ that would elevate the werewolf to classic monster status. Not that there’s anything wrong with “Werewolf of London”, it’s a terrific picture in its own right.

Perhaps the star of this film could be the reason why this picture didn’t catch on like the later wolf series with Lon Chaney. Henry Hull (as Wilfred Glendon) doesn’t come across as being the most likable guy in the world, or one who can invoke much sympathy like Larry Talbot. Hull is such a cold fish that it doesn’t come as a great shock when his jailbait looking wife (Valerie Hobson) runs into the arms of her former beau. But, whatever charm Hull may lack, Warner Oland makes up for in spades with his show-stealing performance as Dr. Yogami. “The werewolf is neither man nor wolf, but a Satanic creature with the worst qualities of both.”

This movie also tips its hat to the horror films of James Whale, injecting liberal amounts of comic relief throughout the proceedings, with the biggest laughs coming courtesy of two old lushes, Mrs. Whack & Mrs. Moncaster, who rent a room to the afflicted Dr. Glendon and after getting a peek of him in his lunar form, vow to give up the bottle, but somehow I don’t think they stuck to that resolution.

Henry Hull and his London Werewolf may linger forever in Chaney’s shadow, but Hull will forever have the advantage when it comes to “best dressed” lycanthrope & no one can ever take that from him.