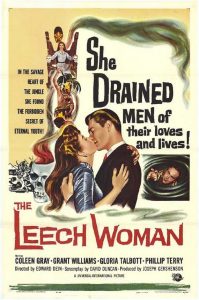 There’s a key scene in the film where Estelle Hemsley, as an old African woman about to be given the gift a youth states: “For a man, old age has rewards. If he is wise, his gray hairs bring dignity and he is treated with honor and respect. But for the aged woman, there is nothing. At best, she’s pitied. More often, her lot is of contempt and neglect. What woman lives who has passed the prime of her life who would not give her remaining years to reclaim even a few moments of joy and happiness and know the worship of men. For the end of life should be its moment of triumph. So it is with the aged women of Nandos, a last flowering of love, beauty–before death.” Unfortunately, this is, for the most part, true today, especially in films. A much older actor can pair with a decades-younger actress, and there’s no fanfare. The opposite rarely occurs, and if it does, there’s much ado. In this film, Coleen Gray receives this gift and does have to kill to keep her youth, but *SPOILERS AHEAD* only to selfish, dangerous people: her cruel husband (Philip Terry), a guide who ditches her (John Van Dreelen), a crook (Arthur Batanides) and a jealous would-be killer (Gloria Talbot). She won’t harm her new boyfriend (Grant Williams), because she loves him. Gray has several classics to her cinema credits, but she’ll be remembered for this role: convincing makeup are given full-bodied mannerisms, voice inflections that amazingly reflect old, middle, and young age. Yes, it’s a small budget, with much stock footage, and could have been more developed, plot-wise. But the cast is earnest, particularly Hemsley, expert as the native old woman, Kim Hamilton as her younger counterpart, Terry as the nasty, rotten-to-the-core husband. But the aspects of male vs. female aging will stay with you after the final fadeout. The title remains appropriate (i.e. “leeching off others”).