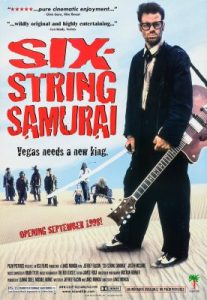 This film can best be described as a post-apocalyptic spaghetti western samurai fantasy. Our hero is a taciturn Buddy Holly look-alike traveling with samurai sword and six string guitar as he treks across scenic Death Valley on his way to America’s last outpost of civilization, Lost Vegas, where he expects to be coronated as the new King, Elvis having died without naming a successor. Accompanying him is a stereotypical post-apocalyptic bleating child snatched right out of “Fistful of Dollars”. Buddy slices and dices his way through an evil bowling team, the Russian army, would-be usurpers to the throne, and anyone else who gets in his way. The music is good and it’s wonderfully filmed, so have some fun and enjoy the ride.