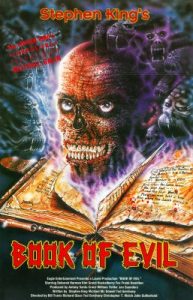 The television horror anthology has a long and noble history. In the Fifties, Rod Serling blazed the trail with THE TWILIGHT ZONE; though the series mostly veered in the direction of what may be called “speculative fantasy”, it did produce its share of horrific/macabre episodes. This was to be followed by THRILLER in the early Sixties, a much more overtly Gothic series hosted by Boris Karloff, and one of the first television series to catch flack for experimenting with graphic violence (one episode featured a man staggering down a flight of stairs with an ax buried in his head!). Serling struck again with NIGHT GALLERY in the Seventies, an often genuinely weird and experimental series that, like THRILLER, often drew from the great pulp horror tales of the past for inspiration. And, in the Eighties, came George Romero’s TALES FROM THE DARKSIDE.

I vividly remember the show as a pre-teen; it would premier late at night, around 11:30 after the news and “normal” programming concluded. As that bleary witching hour approached, when the wholesome prime-time like of FAMILY TIES and THE FACTS OF LIFE seemed miles gone by, disorientation and apprehension would set in – the atmosphere was right for a kid to be scared! And nothing was scarier than DARKSIDE’s opening sequence. What looked like pastoral postcard scenes of rural Vermont would give way to the ominous intonations of Paul Sparer, backed up by a prickly synthesizer score. The title card would then appear in dripping letters of crimson. It was, in a word, unforgettable.

For budgetary reasons, the episodes were shot on video; on the one hand, this gave them an air of cheapness, but on the other lent them a kind of creepy immediacy. The frequent appearance of veteran stars meanwhile, some of who hadn’t then worked in years, provided some old-fashioned cachet. Eddie Bracken starred in one I’ll never forget – A Case of the Stubborns, based on a story by Robert Bloch. Bracken plays a cranky old grandfather who refuses to accept the fact that he has died, much to the distress of his family. As the days pass, Bracken begins to decompose, to the point of literally sneezing his nose off. Another one that stuck with me was called Inside the Closet, which starred Fritz Weaver as a doctor with a horrible Tom Savini-designed secret locked in his doll closet. One of the (deservedly) best-loved episodes was a Christmas-themed affair called Seasons of Belief. This one had E. G. Marshall sadistically terrorizing his children with stories of The Grither, a sort of demonic Santa being whose name must never be spoken. Building to a truly spectacular conclusion, Seasons of Belief stands out as an endearingly bilious Yuletide classic. In addition to the old-timers, TALES FROM THE DARKSIDE boasted some up-and-coming talent as well – the aforementioned A Case of the Stubborns also starred Christian Slater. Another one I remember, called Monsters in My Room, had little Seth Green as a boy who faces the titular trouble. To further sweeten the package, horror masters like Romero, Savini, and Bloch frequently contributed behind the camera.

TALES FROM THE DARKSIDE looms large in the pantheon of Eighties horror (when the genre wasn’t afraid to be bold and nasty), as well as in the hearts of those of us who remember it. As it’s been off the air for some time, a DVD release may well be in order, so that a whole new generation might behold what gave many Children of the Eighties a pleasant little chill back in the day. As the show’s closer immortally put it: “The Darkside is always there, waiting for us to enter, waiting to enter us. Until next time – try to enjoy the daylight.”