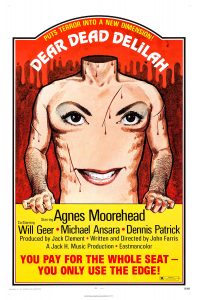 1972’s “Dear Dead Delilah” was a popular title during the television rounds of the late 70’s, a regular on both Pittsburgh’s Chiller Theater and Cleveland’s Hoolihan and Big Chuck. Remembered chiefly as Agnes Moorehead’s last feature film (though she had some TV roles plus a voice in 1973’s “Charlotte’s Web”), the former co-star of Bette Davis in 1964’s “Hush…Hush, Sweet Charlotte” gets her own starring vehicle in a similar vein, but on a lower budget. Whereas the death of Bruce Dern in that film was shocking for its time, the violence in this 1972 follow up is far bloodier and more disturbing, a fitting finale for a decade of aging actresses in modern horrors. Like the Bette Davis characters in both “What Ever Happened to Baby Jane?” and “Hush…Hush, Sweet Charlotte,” the Agnes Moorehead character, Delilah Charles, has lived her entire life in the service of her late father, in this case running a plantation in Tennessee called South Hall (shot on location by legendary Nashville songwriter Jack Clement, who never produced another feature). The eldest in a family of four siblings, Delilah has seemingly been at death’s door for some time, and has gathered the rest of the clan for a reading of her will. Will Geer plays cousin Ray Jurroe, who almost married Delilah years before, Michael Ansara plays brother Morgan, a gambler about to be imprisoned on a $40,000 debt, Dennis Patrick plays brother Alonzo, a pathetic doctor who has also fallen on hard times, and Anne Meacham plays alcoholic sister Grace, who freely carries on with Richard (Robert Gentry), unscrupulous husband of niece Ellen (Elizabeth Eis), who has been acting as Delilah’s trusted nurse for the past three years. Richard has been supplying heroin for the unfortunate Alonzo, and is also responsible for bringing in a reformed ax murderess, Luddy Dublin (Patricia Carmichael), who had served 30 years in an asylum after chopping up her abusive mother. While the family objects to Delilah’s decision to leave the house and grounds to the state, they are especially mystified by her revelation that Poppa’s mythical $600,000 not only exists, but is available for whoever finds it. One by one, the cast is killed off, occasionally in extremely gruesome fashion, and its always Luddy cleaning things up afterward, so no one among the household is even aware that there’s a murderer in their midst (manservant Marshall simply disappears from the film). Noted horror author John Farris has very few movie credits, such as “When Michael Calls,” a 1972 TV movie, and Brian De Palma’s “The Fury,” so it’s something of a surprise that he would undertake to both write and direct this feature (the only one he ever directed), but his sharp dialogue, expertly delivered by a superb cast, makes the rather talky first half a real joy to watch. Agnes Moorehead delivers a wonderful performance confined to a wheelchair, a real tour de force of regal Southern hospitality, and her bitter confrontations with various family members are laced with sly humor. Dismissed in its time as a cheap Bette David knockoff, and further under appreciated today as just plain boring, the film’s reputation is unlikely to improve with today’s fast paced audiences.