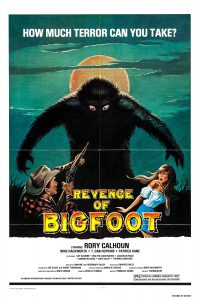 Although this movie will not keep you on the edge of your seat or get your adrenaline pumping, it is an entertaining way to spend 90 or so minutes. In fact, compared to what Hollywood has been cranking out for the last several years, this movie could be considered a breath of fresh air. We have to remember that it was a low budget film even for 1978, and it was filmed entirely in Texarkana, a border city on the state line of Texas and Arkansas. If it could be re-released as a “Kid’s” movie, I think the younger generation and their parents who would accompany them would leave the theater with a smile on their faces. “Revenge of Bigfoot” has some really funny lines and situations. The “Hollywood” star is Rory Calhoun, but the real star of the movie is Mike Hackworth and his portrayal of his character, Rufus J. Pickle. Mr. Hackworth is a Texarkana native and a multi-talented guy. He also wrote and sung the theme song for the movie. I was an extra in the movie—in the hunt scene. It was amazing that people would stand in line for hours just for the opportunity of POSSIBLY being selected as an unpaid extra. It was a fun time, and I will always have fond memories.