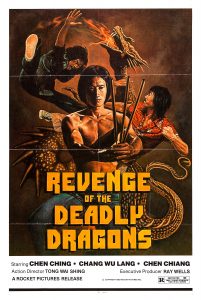 THE BLOODY FISTS (1972) is of interest to kung fu fans because of several noted participants: it’s an early example of the fight choreography of Yuen Wo Ping (best known these days for IRON MONKEY, THE MATRIX and CROUCHING TIGER, HIDDEN DRAGON); it’s got good early performances by Chen Sing and Chen Kuan Tai, reversing their usual roles by playing hero and villain, respectively; and it’s an early work by Ng See Yuen who went on to direct a number of exemplary Taiwan-shot kung fu films (e.g. SECRET RIVALS, INVINCIBLE ARMOUR). It’s not particularly well-written, photographed or edited, but it is consistently watchable and does offer a steady stream of fight scenes.

The plot is quite simple and involves attempts by a band of Japanese karate fighters to get their hands on supplies of the powerful plague cure, the Dragon Herb, from a remote Chinese town in the early 20th century. The Japanese are brought to the town by an exiled villager and are opposed by the Yuens, a group of kung fu fighting brothers. Chen Sing plays a fugitive outlaw and kung fu expert who is so outraged by the behavior of the Japanese that he decides to stay in town and fight. Chen Kuan Tai, adorned with a long-haired light brown wig, plays the top Japanese fighter.

It’s not clear when the film is set. The police who chase Chen Sing drive a 1930s sedan and carry pistols from that era. Yet the village setting looks like that of any number of kung fu films set hundreds of years ago and the Japanese look like they stepped out of an old samurai movie (with the exception of one curious costume detail-the plaid pants worn by the karate fighters). By the 1930s, the Japanese invading China were a lot more sophisticated and better armed (and garbed) than the characters here.

The fights are generally well-staged, always in outdoor settings, some of them quite dramatic. Chen Kuan Tai and Chen Sing are the only name actors and neither gets to fight enough. The rest of the cast is unfamiliar and unmemorable as actors, although quite good as fighters. (Yuen Wo Ping makes a cameo fighting appearance.) The fights are frequent and build up the necessary tensions leading to the final showdown between Chen Sing and Chen Kuan Tai on a sprawling beach. Since Chen Sing was short and Chen Kuan Tai was long-limbed, the two fighters wouldn’t seem particularly well-matched, but the final bout is quite intense and well worth the wait.

Because of his dark looks and menacing smile, Chen Sing was cast as a villain in film after film (e.g. THE NEW ONE-ARMED SWORDSMAN, THE LEGENDARY STRIKE, THE MAGNIFICENT, all reviewed on this site). However, he also made a more interesting hero than the usual kung fu star but was rarely cast in such roles. This may be the only heroic role of his yet seen by this reviewer. Chen Kuan Tai was a great hero in films like THE BOXER FROM SHANTUNG and EXECUTIONERS FROM SHAOLIN, but could also be a memorable villain (see CRIPPLED AVENGERS/aka RETURN OF THE FIVE DEADLY VENOMS).

The music track for this film consists of large helpings of James Bond musical cues and bits lifted from other Hollywood soundtracks. The tape/DVD edition of THE BLOODY FISTS (with “The” omitted from the video box title) currently available in the U.S. offers a very good letter-boxed transfer of a widescreen print.