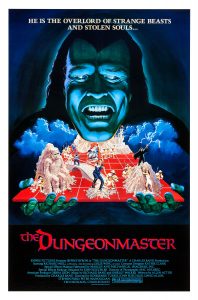 If you like your 80’s cheese fantastically melted, then you’re going to have more than a mouthful with THE DUNGEONMASTER. Jeff Byron plays computer-geek Paul (with a computer called “Cal” installed in his… glasses, no less) with a beautiful girlfriend. Absolutely for no reason at all, he and the girl suddenly get zapped to another dimension where Mestema reigns. Mestema (Richard Moll with evil make-up, very appropriately acting the part), is some devil-demon-dude who is just bored out of his wits, and decides to have some fun by subjecting Paul to seven challenges. This is where the fun begins!

THE DUNGEONMASTER simply is an excuse to display as much 80’s special effects wizardry and cram as much horror/sci-fi/fantasy you can in one movie. All segments are utterly pointless. The whole movie is, for that matter – I think the point is: If Paul loses one of the challenges, Mestema gets the girl. Or something. But what matters is: THE DUNGEONMASTER is just too much fun. Especially if you still carry the child within, as they say, and allow yourself to be amazed and entertained by this old school SFX extravaganza.

We’ve got a claymation giant made out of stone. Trolls. Zombies. A little devil puppet-dude. A werewolf. Blackie Lawless and his band W.A.S.P. performing. A serial killer. Post-Apocalyptic mutant-bikers. Animated dragons. And much, much more… I ask you: How can you not have fun with this film? Also, go take a look at the full crew involved in the making of this film. We are talking the pre-Full Moon dream team here: Charles Band, Richard Band, David Allen, John Carl Buecher, Patrick Manoogian, Ted Nicolaou,…

I admit, when people should give this a first time watch in this day and age, they’ll probably call it a bad movie. But if you grew up on silly nonsense like this, there really is no substitute.