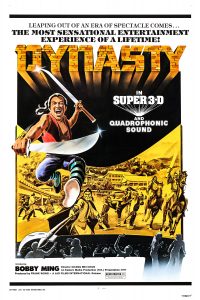 Before the huge 3D revival of 1982-83 (when I myself caught “Andy Warhol’s Frankenstein” and “Jaws 3D”), there were a few 3D productions of rather low quality filmed around 1976, “A*P*E” perhaps being the most notorious. Certainly the best remembered of the small number of martial arts features filmed in 3D, “Dynasty” was issued under a dizzying barrage of alternate titles, such as “Qian Dao Wan Li Zhu,” “Super Dragon,” “Supercross,” and “Warlord.” Its added Quadrophonic soundtrack can still be detected (right from the beginning, the soldiers marching on horseback) in the 2D DVD from FarEastFlix, the best quality version available not in 3D. They certainly weren’t bashful about utilizing the dimensional depth, as no minute goes by without something being thrust at the audience, from numerous weapons to simple bell ringing. Although slow to start at 90 minutes, there’s really no paucity of gory action, with one dying victim continuing the battle even after both hands are cut off!