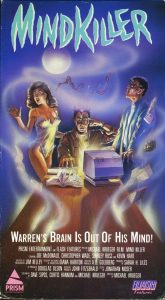 Warren is a socially inept and very shy young librarian who is highly susceptible to self-help manuals.While pouring over one such book he discovers that by expanding his mind he can control his environment and the actions of other people.Disturbed by his changing personality his co-worker Larry and his room mate Brad attempt to help but instead become the objects of his wrath.Eventually Warren loses control.His overtaxed brain turns into a monster and bursts from his skull.The horribly mutant brain-creature takes on a life of it’s own.”Mind Killer” is an enjoyable horror trash with terrible acting and extremely bad creature effects.The central character of introverted Warren is an interesting touch.