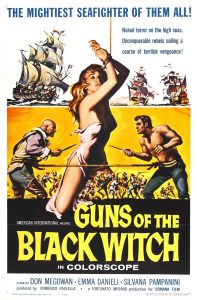 In the early 1960s Italian film directors were churning out sword and sandal Hercules/Goliath type “epic” films made with slim budgets and cheesy special effects. All that was needed was an American actor like Steve Reeves or Mark Forrest with bulging pecs and biceps to get the attention of action fans. Every once in a while the directors would change the era and the historical time. Thus some pirate movies like “Morgan the Pirate” with Reeves and “Guns of the Black Witch” were made. “Guns of the Black Witch” is a pretty good saga itself, a pretty strong pirate tale. American actor Don Megowan, who made a lot of westerns and horror films in the US has the lead of the pirates who fight their Spanish warlords tooth and nail. Some very good looking Italian women, namely Silvana Pampanini complement the cast and provide some good eye candy. Megowan as a boy was roughed up by Spanish leaders and is hell bent on revenge as he gets older and turns into a man. The ever present Livio Lorenzon, a staple with his bald head and mean demeanor of all those Italin Hercules movies is the bad guy and he duels Megowan to a fighting finish. The story mainly concerns two brothers who must come together and fight the Spanish and Megowan of course courts a Spanish beauty, who is the king’s daughter no less. This of course complicates things as she must remain loyal to her Spanish father. Never worry, love conquers all and at the end Lorenzon is disposed of and Megowan sets off with his lady to conquer new horizons. Not as good as “Morgan the Pirate” with Reeves but still a solid pirate tale. Wonder why the producers had to use the exact same sound track as “Goliath and the Barbarians” though with Reeves??? Go figure….must have wanted to save some money. Worth seeing.