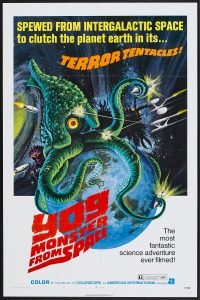 The film is set on a remote tropical island that is being looked at as the possible home of a luxury tourist resort. Funky photographer Kudo (wearing a floppy hat) and his adorable female companion are there to take pictures and check in with some other company personnel on the island. Dr. Mida is there to study marine evolution. And then there is the suspicious acting Obata, who claims to be an anthropologist but is actually an industrial spy.

There is another visitor to the island and this one came from a lot farther than Tokyo. The misty blue space creature Yog (an “astro-quasar” he is called) has fallen to Earth on a space capsule and is now busy turning harmless animals into giant monsters. First of these fearsome freaks is the weird octo-squid Gezora, a plastic-eyed giant that uses its tentacles to walk (stagger is a better word) on land! Gezora sets about killing people and destroying the native huts, but Kudo and pals find a way to defeat the beast.

The only problem is, Yog just jumps to another giant monster. Ganime, a giant crab, is next and then comes Kameba, a titanic tortoise who could give Gamera a run for his money. Not only that, but Yog also takes control of Obata and uses him to sabotage the human’s plans.

It’s a sticky pickle but the Earthmen find a secret weakness of Yog’s that they can use to attack the space monster. Another key to Yog’s defeat is Obata…can his mind be turned against the Monster from Space?

The movie is fun and exciting if you’re not too demanding. You see plenty of the monsters and even a nasty battle between Ganime and Kameba. Call me nuts, but I thought dialog and acting were a lot better here than other period kaiju films. The characters had more personality…especially Kudo, played by Akira Kubo…and I kind of liked the way every tied together.