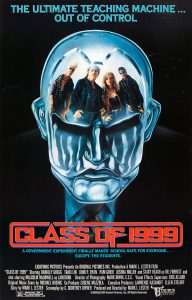 Class of 1999 is a classic example: according to this film, by the year 1999 gang culture will have reached such a level in the U.S. that certain areas—known as Free Fire Zones—will no longer be protected by the police. Kennedy High School, situated in one such lawless zone, becomes the testing ground for three experimental robot teachers (played by Patrick Kilpatrick, Pam Grier, and John P. Ryan), adapted from military battle droids by unscrupulous MegaTech head honcho Bob Forrest (Stacy Keach).

Recently released from prison, gang-banger Cody Culp (Bradley Gregg) intends to give up his criminal lifestyle, but when the droid teachers begin to revert back to their military programming, dealing with their unruly students using extreme force, he and his gang, the Blackhearts, join forces with their rivals, the Razorheads, to try and stop the killing.

According to director Mark L. Lester (who also directed the superior Class of 1984), late ’90s fashion hasn’t moved on much from the decade before, the film’s youths sporting some truly nasty attire (worst offender being Joshua Jackson as Cody’s brother Angel, who wears yellow leggings and matching tunic and has the cheek to tell Cody “Man, you got to think about your image”). Also exhibiting zero sign of taste: Stacy Keach as freaky albino Forrest, whose hairstyle is a cross between a mullet and a rattail, and who wears zombie contact lenses for no apparent reason (I thought he was an albino at first, but his ‘tache is black).

This version of 1999 also sees the art of robotics advanced to a level where machines can pass for human, something clearly inspired by James Cameron’s The Terminator. As the droid teachers battle Cody and his pals, they shed their skin to reveal powerful weapons, which takes the violence up a notch and allows for some pretty impressive animatronic effects and gloopy cyborg gore, Grier opening up her chest (complete with prosthetic tits), Ryan having his cranium blown off, and Kilpatrick’s head reduced to half human, half robot (before having his noggin separated from his body via forklift truck!).