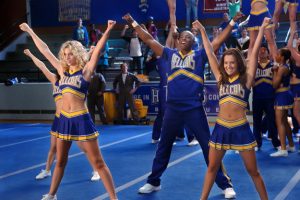 Give ’em the old double whammy

Back since the days of old Methuselah

Everyone loves the big bambooz-a-lah

When you’re in trouble, go into your dance

Though you are stiffer than a girder

They’ll let you get away with murder

From Chicago, The Musical

Vegas is a really interesting place. It is a town that really should not exist being situated in a desert with a diminishing water supply. The population is 632 thousand with a visitor base of 39.2 million annually. It is the ultimate transient community. As a community, it lacks the substance an older community has and also lacks an entrenched sense of being, and for the most part, is temporary facade, contrivances of junk bonds and money laundering.. It’s glitzy, it’s glamorous, and by its nature it is temporary. Casinos get blown up and new ones built once the rubble has been cleared. The Vegas of the Rat Pack, the 99 cent Shrimp Cocktail and the $2.99 Buffet is now long gone. The Bellagio, once the jewel on the Las Vegas Strip is becoming scuffed and tired. The water show promises a lustre that has not been able to be maintained. Things do not last here in the Nevada desert. To be frank, I am always excited to go there and even more excited to leave.

Every year Cinemacon descends on that grand old dame of a casino, Caesars, and for 4 days holds a pep rally for the increasingly tired motion picture exhibition business. The studios , this year 11 trot out their wares. Jumping onto the stage, professing their empathy, and sole concern for the theatre owner. Heck, during one session, one studio rep told the audience if your sales person was not giving you the dates you need then go over their heads. I do not know how many times I was retold this story by exhibitors, and each reaching the same conclusion that they were being fed snake oil. Exhibitors at their core are smart. You see studio guys, the theatre owners may not say something or call you out in public because they need your pictures and they also know how testy you get…..but within them are a core of hardworking and clever operators who have long since stopped swallowing the diet of baloney you have been feeding them.

There were companies selling chairs, people selling popcorn, soft drinks, ticketing systems and 4D cinema systems. What I noticed is outside of the candy companies, there seemed to be fewer smaller booth exhibitors selling a more diverse base of product. Large and innovative seemed to be contained within the major players BARCO and CHRISTIE. You had the stalwarts like MIT, VISTA, BALLANTYNE, and COKE which are always good, but what I found interesting was the diminishing amount of new and emerging companies in this space exhibiting. I know they are out there, offering some pretty dazzling and innovative products, but for some reasons of their own they did not decide to come to Cinemacon.

Some of the big noise at the show came in the form of a couple of iterations of a sort of “industrial Netflix” for the theatres. We were underwhelmed by both of the presented offerings because they seemed to ignore the core issue facing theatres and that is community building and the re-introduction of showmanship. One the companies making the offering confessed sheepishly that they saw the theatres as a launching pad into the home. I was shocked by this and was glad a couple of my associates were with me when I heard it.

Here are some key take-aways

The studio are aggregating into one another, eradicating a century of history and tradition Disney’s box-office domination of the market was cemented by the key Disney Theatrical Management presenting Wreck-It Ralph: Ralph Breaks the Internet and three 2019 titles, Aladdin, The Lion King and Dumbo. Fox film chairman Stacey Snider said his adieu to a business founded by titans Joseph Schenk, Darryl F. Zanuck and Spyros Skouras. As Fox slowly slips into the Sunset, we as movie people should realize that the studio of John Ford is turning into a historical footnote.

Another real issue that was raised was the timing and release schedule of the sci-fi epics Mortal Engines (Universal, Dec. 14) and Alita: Battle Angel (Fox, Dec. 22), these pictures open a week apart and will have to fight mightily for a similar demographic. Theatre owners were not keen on Sony’s Venom or the Warner release Aquaman. This showed some cracks in the kingdom of the tentpoles.. Some concerns arose regarding The Transformers spin-off Bumblebee, being released December 21st as well…up and down the corridors exhibitors are wondering what is going. I personally feel that a smaller release will be planned for each title, and the studios will begin experimenting with a modified pre-1976 release strategy. Increasingly the amount of prints available will be diminished as a tool for increasing the viability of their direct to the home offerings. Day and Date is going to be crashing down on us a lot sooner that people think. Interesting times for sure. What was really interesting is that Bradley Cooper’s first directorial effort, the fourth remake of A Star is Born (Oct. 5) was very well received, indicating a further reliance on a female demographic to drive box office.

One of the most hotly debated topic was replacing DCP projectors with giant LED screens. I personally feel this a dangerous mistake and could provide an opportunity to sneak in another VPF regime. The cost ….drum roll please…$750,000 a screen. For studios to pony up the bucks for this seems to be a bit far fetched. I can see these being deployed in large centers. If I were IMAX, I would start being concerned. These screens are capable of 8K and will offer a real challenge to the large format. On a global basis, this is basically equipping theatres with huge TV’s; turning theatres into a giant family room seems to be a non-starter for most theatres and given the issues the technology has with sound, it could be awhile before it will see any form of mass marketing. But you know technologies companies being technologies company real goal is to build an 80 inch model which uses the same technology and will be offered at $1200. You know that is coming. Movies should always be a projected medium.

Take a look in the audio world at the push to renew vinyl LP’s and analog mediums. Analog is having a resurgence and soon it will hit movie theatres.

There were a ton of celebrities; Bradley Cooper, Leonardo DiCaprio, the cast of Oceans 8….heck even Quentin Tarantino showed up (hey Quentin, lets get the New Beverly re-opened will ya). I thought Quentin showing up was really cool.

There was something at Cinemacon that did really intrigue me, something that for me was unexpected and much welcomed. What I saw for the first time was some solid grass roots realizations that something had to be done about the direction of the business and the realization that they could no longer trust the chains or the studios to chart the path forward.

I had the pleasure of sitting down with 3 of the steering committee members working to form the Independent Cinema Alliance. This group keeps showing me that this is an organization that is genuinely concerned about the plight of the independent theatres. For them this is a selfless mission where they are committing countless hours of volunteer time every week trying to better the lot of the independent theatres. Their dedication is inspiring. As a professional in this business I want to let Gina DiSanto, Jeff Benson, and Bill Campbell know how much the efforts they are putting in means and how truly important their work is. Theirs is a thankless job with little or not personal rewards but they are wading through muddy bureaucracies and cheap politics in order to shine a light forth for independent theatres. Thank you for all your efforts.

Amidst the razzle and the dazzle, the hype and the empty promises put forward at Cinemacon were the independent theatre owners. For me theses folks were the highlight of the show. Talking to them over concession strategies, issues with booking, and then having them share their plans for growing and innovating their business was a thing of joy. To sit down with honest and deeply committed people reminded me that at the core of this business sit exhibitors who deal with moviegoers, who buy the concessions, who book the movies, who sweep the aisles at the end of the night. These are the people who make this business work. Sitting down with a couple of theatre groups showed me that they realized they had a fight on their hand and they were up for the challenge. They were re-committing themselves to serve the needs of their community and not serve the needs of Hollywood. They were looking for key strategies to re-engage with Gen Z’s and Millennials. They wanted to ensure that they were using their own base of strength to grow and to pay a deeper attention to the needs of community they served. They seemed to be grasping that they as theatres had to draw from the past in order to survive the future. At this convention, their dedication, their hopes and their hardwork cut through the false and presented the truth that if movie going is to survive it is because of the independent theatre owners.

As I left Vegas it was the conversations with the small town theatres owners that stayed with me. The words and the sizzle brought by Hollywood quickly lost resonance and faced away like the vapor it is.. Flying back east, looking out the airplane window….seeing one community after another as we flew over them. I knew that some of these towns had independent theatres in them. In smaller centers these independent theatres are a totally different animal than in a large urban center. Often a independent theatre is the heart of the community. How well that theatre does is indicative of the health of that town.

It is conversations with the small operator that that gave me hope. Those are the operators that I really want to cheer for and support. On the last day I paid $5.25 for a small bottle of orange juice at a hotel convenience store. It reminded how badly I wanted to be back in the Mid West.