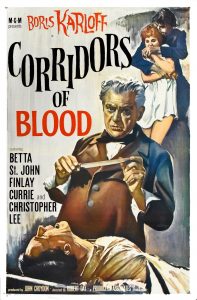 Any film featuring both Christopher Lee and Boris Karloff is an instant must-see for any horror fan. Alone, either one of these can carry a film; but together they make a force to be reckoned with indeed!

Karloff stars as the central character; a doctor who, through trying to find a way to separate pain from the knife (create an anaesthetic), becomes addicted to the chemicals he is working with. The character that Karloff portrays here is a world away from his most famous role; that of Frankenstein’s Monster, but Karloff has proved time and time again throughout his illustrious career that he can handle all sorts of different roles, and he handles this one brilliantly. Karloff draws you into his character and really makes you believe that his ultimate, and only goal is to create something to ease the pain of his patients. When his character takes a more sinister turn after becoming addicted to his chemicals, Karloff impresses more. The way his eyes look and the atmosphere of weakness that he portrays is fantastic and just by looking at the man you can tell that he is extremely unwell. Karloff is one of horror’s finest assets, and he more than proves himself with his role here. Of course, he doesn’t need to prove anything to anybody; it’s well known that he is one of the masters of the genre. As mentioned, starring alongside Karloff is another horror master; Christopher Lee. Lee doesn’t have a great deal of screentime in the movie; but, as Lee would go on to show time and time again in his later career; with just his presence, Lee can create a foreboding atmosphere about his character that is unmatched by almost every other actor out there.

The film isn’t so much a horror as a thriller charting a man’s decent into addiction, but the movie still features a lot of horror moments; most notably the screams of the patients on the operating table and every scene with Christopher Lee in it. Director Robert Day manages to create a foreboding atmosphere that firmly places the viewer in 1860’s London. I didn’t doubt it for a second, and that is very admirable; especially when the budget is considered. Corridors of Blood isn’t a very well distributed film, and that is a shame as there is much to enjoy about it. However, if you do ever get the chance to see it; be sure to take it. You’ll be glad you did.