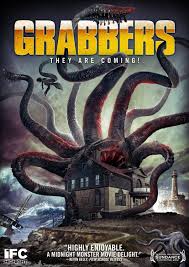 There’s nothing like some good old-fashioned monster movie mayhem! That’s also what director Jon Wright must have thought when he read the script for this totally unpretentious but enormously amusing and respectably made mixture between comedy and horror. “Grabbers” isn’t just reminiscent to the 1990 crowd-pleaser “Tremors”; it’s actually the best monster flick since! “Tremors” was, and still is, so popular because of its fast-paced action sequences, terrific special effects and the swell dialogs & marvelous chemistry between the lead actors. “Grabbers” exactly features all these trumps as well, more or less in the same portions even, and yet it never once feels like a lame imitation or an uninspired knock-off. The uniqueness of “Grabbers” lies within the fact that it’s a largely Irish production. The screenplay shamelessly exploits all the typical clichés and stereotypes that are irreversibly linked to the Irish people and their culture, but the self-parody works amazingly efficient. When a fiery meteor crash-lands into the sea, the live extraterrestrial content washes ashore and promptly feasts on a colony of grey whales. Somewhat later, when the town’s missing person cases alarmingly increase, the drunkard deputy and the geeky new female “garda” discover the mother alien’s hideout on the beach. Together with a local scientist, they also discover the fierce creatures survive on blood and are therefore allergic to high doses of alcohol in the blood. So what’s a bunch of poor, defenseless and thirsty Irish folks to do? The easy and light-headed ambiance of “Grabbers” sucks you in from the very beginning and there are many more ingenious elements to make this an enjoyable viewing experience. Richard Coyle (from the BBC hit-series “Coupling”) and the 15 years younger native Irish actress Ruth Bradley play extremely well together and even the completely implausible slowly unfolding romance doesn’t annoy too much. There’s also a large variety of awesome supportive characters, like a mumbling fisherman and a couple of crazed tavern owners. The monster’s design and special effects are very adequate. Okay, it’s computer engineered, but not exaggerated. The mother alien actually looks somewhat like the mythical Kraken, with a truckload of tentacles and hundreds of razor sharp teeth at the center. Many of the situations are laugh-out-loud funny, but the important ones are also tense and exhilarating. Great entertainment, highly recommended.