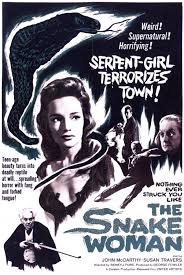 “The Snake Woman” is a brief (only 68 minutes long), painless, silly, and quite amusing British horror film with some decent atmosphere and capable performances. It’s not memorable, overall, save for its sexy “snake woman”, but it’s entertaining stuff. It’s low budget enough that the monster action is all off screen, and it’s got a talky script, to boot.

An early credit for Canadian born director Sidney J. Furie (whose diverse career has included things such as “The Ipcress File”, “The Entity”, “Iron Eagle”…and “Superman IV: The Quest for Peace”), it’s not strong on story, but it has its moments. In a 19th century village, a herpetologist (John Cazabon) is treating his wife’s mental illness by injecting her with snake venom (!). The result is their daughter is born with cold skin and blood, and other reptile like tendencies. A doctor (Arnold Marle) spirits the kid away and gives her to a shepherd (Stevenson Lang) to watch over. 19 years later, the doctor returns from an extended stay in Africa to find that villagers are perishing from snake bites. A Scotland Yard detective (John McCarthy) is put on the case.

The highlight of the piece has to be the presence of beautiful Susan Travers, who plays our snake woman. Her appearances in the woods have just the right slightly spooky touch. McCarthy is a moderately engaging hero who of course believes in sane, routine, believable answers to questions, but realizes that there’s something genuinely strange going on here. Geoffrey Denton offers likable support as the retired colonel Clyde Wynborn who asks for the Yards’ help. As befitting a character of her type, Elsie Wagstaff is a hoot as the witch-like woman Aggie who knows the girl and the village are “cursed”. As one can imagine, the resolution to this is rather abrupt, which prevents it from being completely satisfying.