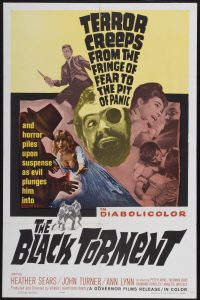 “The Black Torment” might not be a genuine horror masterpiece  it does has its flaws and shortcomings  but this film is so drastically overlooked and underrated that I wish to praise it a little extra, hoping that fans of classic Gothic horror will go through more efforts to track it down! This film really deserves a wider audience and it’s not because Hammer or Amicus studios didn’t produce a certain horror film that it’s automatically inferior. “The Black Torment” is a hugely atmospheric and beautifully photographed horror/costume drama directed by Robert Hartford-Davis. Noticing the director’s name alone is a surprise already, since Harford-Davis’ other horror films (“Incense of the Damned” and “The Fiend”) were both irredeemably bad and quite ugly to look at. This film is a world of difference; stylish, compelling and featuring several sequences that qualify as genuinely unsettling. Sir Richard Fordycke returns to his wealthy father’s estate with a new bride because his first wife sadly committed suicide for not being able to bear children. He doesn’t receive a warm welcome, though, since several superstitious villagers spotted him during his absence and he supposedly even killed a local girl. Shortly after his return, Richard himself starts to have visions of his deceased wife walking through the garden. The whole explanation to the “mystery” is rather rational and unsurprising, but it’s the sinister atmosphere that sticks to you. The scene in which the veiled ‘ghost’ rides through the woods screaming out the word “MURDERER” truly sent cold shivers down my spine! That definitely is the most wonderful effect a horror movie can give you! Highly recommended!