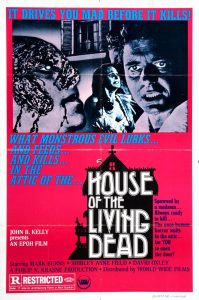 An aristocratic family run a farm in South Africa where the other son (Burns) is set to marry his English lass (Field), much to the chagrin of his fiercely protective mother (Inglis). A series of strange murders and rituals force Field to re-consider her commitment, as the enigma of the demented brother (locked away in the upper floor of the family mansion), becomes too much for her to ignore.

It’s pure tripe wasting Field’s considerable talents, and those of supporting actor Oxley as a concerned doctor whom Field befriends on the journey from England. Initially an affable character, Burns quickly becomes an arrogant aristocrat and borderline Oedipus complex to mother Inglis, who plays the family matriarch with all the usual pomp you’d expect. It’s a relatively small cast lacking depth and familiarity beyond the three leads (Burns, Field and Oxley).

While the twist ending might leave some surprised, the revelations are lost potential, poorly executed and lacking suspense or thrills. Austin’s movie relies on old-fashioned motifs like the club footed nut jobs who only come out at night and play the pipe organ, witch-doctors proffering sinister incantations that no one believes and chemical experiments that involve dozens of test tubes filled with colourful, smoky potions that make monkeys go berserk. Worse than dull, it promises a great revelation, then fails to deliver.