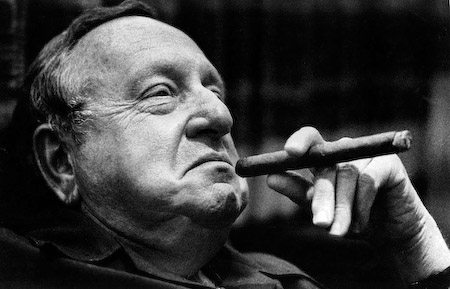 Through 463 movies, Mr. Arkoff’s philosophy of moviemaking never changed. ”Thou shalt not put too much money into any one picture,” he wrote in his 1992 autobiography, ”Flying Through Hollywood by the Seat of My Pants.” ”And with the money you do spend, put it on the screen; don’t waste it on the egos of actors or on nonsense that might appeal to some highbrow critics.”

Because established movie stars were expensive, Mr. Arkoff’s company, American International Pictures (commonly known as AIP), invented its own stars. They included Michael Landon, who wolfed down another student as the title character of ”I Was a Teenage Werewolf” (1957); Charles Bronson, who took the title role in ”Machine Gun Kelly” (1958) ”for 5,000 bucks and was delighted”; Annette Funicello, the former Disney Mouseketeer who was chased down the beach by Frankie Avalon but who remained chaste in a series of surfing movies beginning with ”Beach Party” in 1963; and Nick Nolte and Don Johnson, who gunned their engines in ”Return to Macon County” (1975).

Mr. Arkoff was a short, portly man who chain-smoked huge cigars and looked like the leprechaun Mr. O’Malley in the ”Barnaby” comic strip. He formed AIP in 1954 with a borrowed $3,000 and tall, rail-thin James H. Nicholson as his partner. The Mutt-and-Jeff partnership lasted until Mr. Nicholson left in 1972 after AIP went public.

The first movie Mr. Arkoff and Mr. Nicholson released was ”The Fast and the Furious,” an auto racing, fugitive-on-the-lam hybrid produced by 28-year-old Roger Corman. Before Mr. Corman organized his own company in 1972, he produced and/or directed more than 50 movies for AIP, among them a series based on Edgar Allan Poe’s stories that brought AIP respectability.

AIP was formed at a time when creating a movie company seemed suicidal. People who had gone to the movies every week by the millions were staying home to watch television, and more than 7,000 of the 21,000 indoor movie theaters in the United States turned off the lights on their marquees. AIP’s success was based on Mr. Arkoff’s shrewd insight that teenagers would not want to watch television with their parents and on Mr. Nicholson’s catchy titles and advertising campaigns. (Among his gems were ”The Brain Eaters,” ”How to Stuff a Wild Bikini,” ”I Was a Teenage Frankenstein” and ”A Bucket of Blood.”) AIP never had a money-losing year and, between 1954 and 1960, never even made a money-losing picture.

Both men understood how quickly a pizza-eating, Coke-drinking 19-year-old sitting in his car at a drive-in was turned off by moralizing and how avidly he searched for something new. So they offered ”Hot Rod Girl,” ”Dragstrip Girl,” ”Hot Rod Gang” and ”Dragstrip Riot” in the late 1950’s. But the moment the Beach Boys had their first hit record, they changed direction and headed into the surf with ”Beach Party,” ”Muscle Beach Party,” ”Pajama Party” and ”Beach Blanket Bingo.” By 1966, when youthful rebellion no longer was expressed by drag races or romps on the beach, AIP was ready with something new.

”We made ‘The Wild Angels’ because three different people threw on my desk the Life magazine that had the Hell’s Angels on the cover,” Mr. Arkoff remembered. ”The Wild Angels,” which starred Peter Fonda as the leader of a gang of alienated bikers, was the 200th picture released by AIP. The company’s series of out-of-control motorcycle riders included ”Devil’s Angels” (1968), ”The Wild Racers” (1968) and ”Hell’s Angels” (1969).

In 1968 AIP also offered ”Wild in the Streets,” in which Christopher Jones, as the teenage president of the United States, puts his mother in a concentration camp. That same year, Mr. Jones was raped by three beautiful women in ”Three in the Attic.” In 1970 AIP moved on to ”Bloody Mama” with Shelley Winters as the matriarch of a Depression-era gangster family who loved giving baths to her four adult sons, among them an unknown actor named Robert De Niro.

Many films distributed by the company were attacked by critics who said they would warp the psyche of the nation’s youth. Mr. Arkoff defended them, once insisting of his beach blanket movies that ”there were never any seductions, nobody smoked a cigarette, there was only beer drinking and a little petting.” Samuel Zachary Arkoff was born in Fort Dodge, Iowa, on June 12, 1918, to Louis Arkoff, an immigrant from Russia who owned a clothing store, and his wife, the former Helen Lurie. By the time he was 15, Sam was seeing three or four movies every week. He discovered Variety, the entertainment industry trade paper, on a trip to visit an aunt in Chicago and when he returned to Fort Dodge he paid the owner of Hogan’s Pool Hall 15 cents a week to order it for him.

He was a year shy of earning his bachelor’s degree from the University of Iowa when the Japanese bombed Pearl Harbor. He tried to join the Army but flunked two physicals because he weighed 230 pounds and had high blood pressure. He passed an Air Corps physical by swallowing a huge dose of blood pressure medication before his examination. Unlikely to fit comfortably into an airplane, he spent World War II in the Azores as a cryptographer.

After the war, Mr. Arkoff moved to Los Angeles to be closer to the movie industry. He graduated from the Loyola University Law School on the G.I. Bill. In 1952, married with two young children and a small entertainment law practice, he was struck by a cerebral hemorrhage. When he emerged from a seven-day coma, his doctor said that if he were still alive after five years he would probably be all right. He was 33.

Mr. Arkoff decided that he had better not defer his dream of being a movie producer any longer. In 1954 he joined Mr. Nicholson in creating the American Releasing Corporation, the forerunner of American International Pictures. A Supreme Court antitrust decision that was forcing movie companies to sell their theaters provided the partners with the opportunity they needed. With theaters no longer locked into showing a single studio’s films and with the major studios focusing on spectacles to lure people from their television sets, the new company found its niche in the B movies abandoned by big studios, offering such films as ”The Beast With a Million Eyes” and ”Girls in Prison.”

By 1956 the studio had a new name, American International Pictures, and a strategy of selling double bills consisting of two black-and-white horror or science fiction or action films to drive-ins. Because theaters were not air-conditioned, few studio movies were released from July to September. AIP had the summer — when teenagers were out of school — to itself.

Over the years, AIP mixed and matched genres. It gave cult status to such out-of-favor (and, thus, underpriced) horror stars as Vincent Price, Peter Lorre and Boris Karloff in films like ”The Pit and the Pendulum” and ”Tales of Terror.” It blended films made for black audiences with horror films and came up with a hit called ”Blacula.” It combined beach and horror themes into the successful spoof ”Dr. Goldfoot and the Bikini Machine.” It released Ralph Bakshi’s X-rated animated film ”Heavy Traffic,” about a Brooklyn boy’s struggle to lose his virginity. Vincent Canby of The New York Times called the movie ”possibly the most original American film of the year.” AIP offered a young stand-up comedian, Woody Allen, the opportunity to redo a Japanese spy movie, which he turned into the comedy ”What’s Up, Tiger Lily?” in 1966.

What Mr. Arkoff most regretted was the movie that got away. After budgeting $340,00 and drawing up contracts for a movie written by and starring Mr. Fonda and Dennis Hopper, he could not bring himself to let Mr. Hopper, a novice director, have the complete control he wanted. The 1969 movie was ”Easy Rider.”

For the last 20 years of his life, Mr. Arkoff struggled to make Arkoff International Pictures a new AIP, with little success.