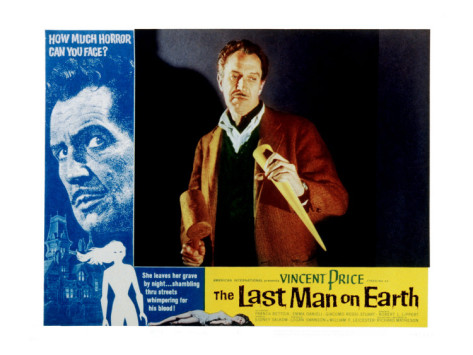 The Last Man on Earth is based on Richard Matheson’s incredible novel I Am Legend, in my opinion the second best vampire novel ever written. Vincent Price does not really fit the image I had in mind from the novel, but there can be no doubt that he gives a remarkable performance here and makes the role his own. It’s a rather somber tale. Price plays Morgan, a man left completely alone in the world by a plague that wiped out the rest of the population, including his wife and young daughter, three years earlier. The virus behind the plague was a vampiric bacillus, so all of the people who died and were not destroyed by fire have come back as vampires. Luckily for Morgan, the vampires are quite weak and simple-minded, for they attack his fortified home every night in an effort to get in and kill him. By day, Morgan goes out hunting the walking nightmares and driving stakes through their hearts, but there are so many that the project seems almost futile. Midway through the movie, we are treated to a pretty extended set of flashbacks to the early days of the virus and the deaths of Morgan’s wife and daughter. Toward the end, Morgan is shocked to find a woman wandering outside during the day, the first human being he has seen in three years. He takes her home with him and thus sets the stage for the movie’s memorable climax.

Obviously, Vincent Price carries this movie on his own back, given the fact that the vast majority of the action takes place around him and no one else. He plays things rather subtly for the most part, which I found quite effective. His memories make him laugh sometimes, but Price’s signature laugh evolves quite effectively into sobs of anger and frustration. The most poignant moments of the film, in my opinion, come when Morgan finds a dog outside his house, the first living creature he has seen in three years. The dog initially runs away from him in fear, but the suffering creature eventually comes back. Morgan cleans him and fixes up his wounds, but the new friendship he exults over soon becomes just another tragedy. The movie doesn’t dwell on the dog episode nearly so much as Matheson does in his novel, and for this I am grateful because I find it rather heartbreaking. The little dog gives an incredible performance, but as is so often the case the canine actor does not even merit a mention in the credits.

The Last Man on Earth really is a remarkably good movie and really showcases the immense acting abilities of Vincent Price. I wish it would have delved into the science of the virus much more intensely than it did; the scientific aspects of Matheson’s story are what make it such a phenomenally good vampire novel. The inner turmoil and chaotic nature of Morgan’s thoughts cannot really be presented effectively on film, nor can the actions and motives of some of the other players in the drama be thoroughly understood. The script writers did take some liberties with the concluding scenes, but it is really for the best because the novel’s conclusion would not have worked in this medium without the audience being given a much more penetrating look into the minds and motives of the characters involved. Some might find the movie creepy, but there is really nothing here that will disturb the timid viewer-the camera never actually shows any of the gruesome acts that tend to be committed by human beings against vampires and vice versa. Somber and depressing as it can be, The Last Man on Earth is the type of distinguished horror movie that appeals in some way to just about everyone.