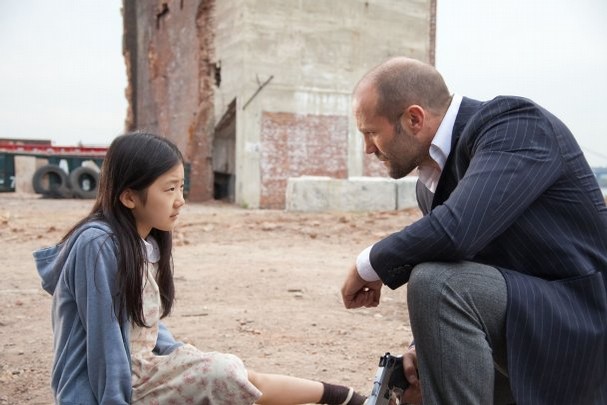 His Awesomeness, Jason Statham, has let it be known that he chooses his films based on the fight choreographer the producers hire. Often as not, that blows up in his face. Why else would the Human Bullet from Blighty end up in dogs like “War,” “Transporter 3” and “Death Race”?

But with “Safe,” working with choreographer J.J. Perry (“Haywire”), that strategy pays off. A slow-building B-movie thriller, the plot is nothing new for Statham. There’s a girl in need of his protection from assorted gangs of bad men. But the dialogue crackles with flinty one-liners.

“Don’t lose sleep. He had it coming,” he tells bystanders after killing a boatload of bad guys. His bald skull and perma-stubbled face lean into the camera like the athlete he was and is, bristling at the bit, ready to get on with the serious citywide butt-whipping he’s about to lay on the Russian and Chinese mobs and New York cops on the take.

We meet Mei (Catherine Chan), who is in a Russian mobster’s office. He wants something from her. A number. He says he’ll subject her to “one of those tortures you people are so famous for.”

Nobody in “Safe” is politically correct. And nobody thinks anything of menacing a little girl. Mei is 11.

Flash back to a year before, when Mei was in a Chinese school correcting her teacher’s math. A Chinese mobster (James Hong, reliably evil) needs her as his courier. Numbers on a computer “leave a trail that’s easy to follow,” he purrs in Mandarin. Little girls who can remember long strings of numbers do not.

Writer-director Boaz Yakin (“Remember the Titans,” “Uptown Girls”) keeps us off balance, spending much of the film’s first half hour following Mei, winning sympathy for her plight. Shipped to America, in the care of a murderous adoptive dad (Reggie Lee), she’s had to learn “business” the hard way — witnessing torture, murder, shakedowns and corruption.

Then, there’s mixed martial arts cage fighter Luke (Statham), a man who has just crippled an opponent in the ring in a fight Luke was supposed to throw. The Russian gamblers plan elaborate punishment for him. They kill his pregnant wife and turn him loose, promising to murder anyone he gets close to, no matter where he goes.

It’s a promise we see them keep. “If you stay here tonight, tomorrow we’re going to kill your landlady!”

Mei slips free of her captors, but only temporarily. The Chinese Triads want her, and the Russian mob, and crooked cops playing both against each other, led by Capt. Wolf (Robert John Burke, menacing as all get out). That’s when Luke sees her and finds, in her, a purpose: keep her “Safe.”

What we have here is basically an American “Transporter,” with Statham caught up in the most jaw-dropping, quick-cut fights you’ve seen in years. He plows through Russians on the subway, Chinese gangsters in a casino and cops in between, on the mean streets, which he navigates with dazzling automotive dexterity. Occasionally he stops long enough to make a threat.

“I’m going to do things to you that make me ashamed to look at myself in the mirror,” he tells one villain. “When I’m done you won’t even be the memory of a memory,” he promises another.

And Mei? She speaks the fractured English of an 11-year-old learning English as a second language: “Now you know everything. Happiness for you?”

The dialogue and the characters are better than the plot. And the fights are better than even the one-liners. Statham never phones it in, though his roles can seem to be one long version of the same guy: haunted and hunted, in need of a shave.

Yakin writes his story into a few corners, and the object of this quest, again having to do with numbers, is so pedestrian as to remind you that this is the guy who wrote “Prince of Persia” and the dreadful “Dirty Dancing” sequel.

But Statham makes Yakin’s lines sing. And thanks to Perry, he brings the pain. In the world of B-movie action, Statham’s still the safest bet there is.