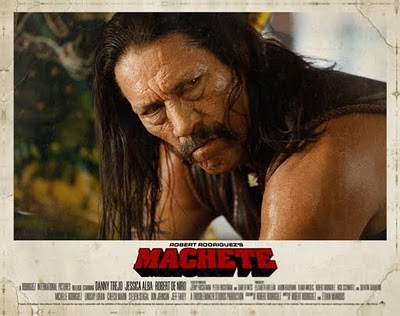 Mel Gibson can apparently still find work.
The controversial actor/director is negotiating to appear in “Machete Kills” for director Robert Rodriguez, according to Deadline.com.
Sounds perfect, if you think about it. Just as long as no one brings real weapons to the set.
Earlier this month, Deadline.com reported Rodriguez wanted to cast Gibson, along with Michelle Williams, in his sequel to “Machete,” a B-movie homage to exploitation flick’s that starred Danny Trejo, Robert De Niro, Jessica Alba, Don Johnson, Michelle Rodriguez and Steven Seagal. No word yet if Williams will participate.
“I feel like I really need to get in there and do it,” Rodriguez told the Huffington Report, about directing the film himself (“Machete” was co-directed by Rodriguez and Ethan Maniquis due to scheduling issues). “It’s just a lot of fun; it’s a really cool concept, and I think it takes it to another level in a way that’s compelling for me to go and do it myself.”
“Machete Kills” will reportedly focus on Machete (Trejo) and his attempts to stop an arms dealer from causing worldwide annihilation. Which is a concept no film has ever tried before.

Rodriguez had initially planned to make three “Machete” films, with the third one taking place in space. Which, technically speaking, sounds awesome.