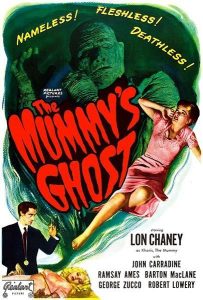 Third in the Universal Kharis series, continuing after THE MUMMY’S TOMB (1942). Despite the increasingly familiar nature of these Mummy sequels, this one still has enough to make it brisk and enjoyable. A significant boost is added in casting John Carradine as the newest high priest who keeps Kharis (Lon Chaney) well fed and back on the march – this time with a new angle in trying to reunite the mummy with his princess Ananka, who is now reincarnated into the form of a sexy modern woman (Ramsay Ames).

For some lucky reason, Chaney thankfully invests some character into Kharis this time, allowing him to become visibly angered, frustrated, and even saddened during the course of the movie. The biggest drawback for this chapter is that Robert Lowery and Ramsay Ames are pretty lousy as the two leading lovers. Universal stock music is used to great effect in many sequences, and there is an offbeat ending that may be the best one of the series.