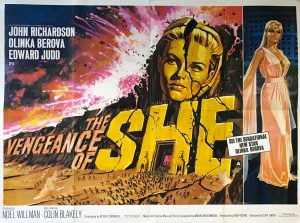 A beautiful young Scandanavian girl called Carol (Olinka Berova) is lured to the city of Kuma by the immortal Killikrates (John Richardson) and Men-Hari (Derek Godfrey) who convinces Killikrates that she is the reincarnation of his lost love, Queen Ayesha, who died years ago. Killikrates intends to give Carol the secret of immortality so that he can live with her forever and restore her power over the city. Meanwhile, he has also promised Men-Hari the secret for bringing him back his old lover.

The basic premise provides a fairly adequate sequel to Hammer’s successful adaptation of H. Rider Haggard’s ‘She’ (1965), which was something of a curates egg in itself (see separate review). The main problem here is that the Peter O’ Donnell script is unconvincing in that one ludicrous situation hardly runs smoothly into another. There is also some unbelievably inept dialogue like when the heroes are chasing after a desert peasant who is on horseback in a Land Rover but they still have difficulty keeping up with him. I bet the British Motor Corporation would have been horrified because that wouldn’t have been good publicity for their versatile off road vehicles! With the exception of Edward Judd’s performance as the English doctor who is in love with Carol, a good cast is working well below it’s capabilities, even though it includes Andre Morell who was superb as Dr Watson in Hammer’s ‘The Hound Of The Baskervilles’ (1959). The film is made watchable by the direction of Cliff Owen who displays his skill at narrative pacing (his work partly redeemed the otherwise unfunny Morecombe & Wise vehicle ‘That Riviera Touch’).