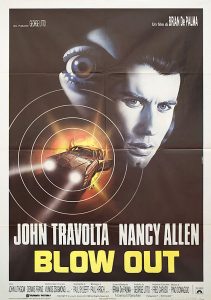 Jack is a sound editor for small films. When he is out one evening recording background noises, he inadvertently records a car crash which kills a politician running for the US Presidency, although Jack saves a girl in the car. When pressured to say that the politician was alone, Jack finds that his recording may prove that it was murder and not an accident. However someone is cutting off the loose ends around the crime.

A clever rework of Blow-Up that is given a thriller twist and visual style by De Palma. The story is quite straight forward and doesn’t contain too many twists and turns. However it does have a good premise at it’s core and it builds to a suitably low-key ending.

De Palma works well with the material  at some points it’s a little obtrusive, but he certainly can frame a shot. From his use of foreground and background focusing to the scene where Travolta realises what he has on tape  he has style to spare. He handles the ending well but perhaps feels he wants to be like Coppola a bit too much.

Pre-career dip Travolta gives his best performance before Pulp Fiction  he plays the everyman really well and is totally convincing. Allen is a little too squeaky and irritating, but get past this and she’s OK. Franz is on-form as a sleazy opportunist, while Lithgow is chilling as a ruthless, clinical killer.

Overall it occasionally feels like there is more style than substance but everyone holds their end up and the result is a solid, enjoyable thriller that maybe pays a bit too much homage to other work.