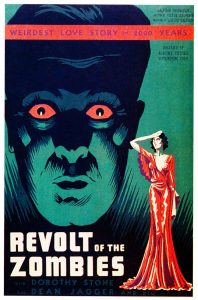 Ever since the cinema-loving universe made acquaintance with a guy named George A. Romero, the word “zombie” automatically gets associated with blood-soaked horror images and non-stop acting sequences. It’s safe to say that his “Night of the Living Dead” formed the zombie movie as we know it now. Yet, in the earliest years of cinema, the premise of reanimated corpses was merely used in slow, nearly action-less psychological thrillers. Jacques Tourneur’s “I walked with a Zombie” is a perfect example and so is “White Zombie”, starring Bela Lugosi. This “Revolt of the Zombies” could have been another example but unfortunately it’s a failure over the entire line and easily one of the most tedious movies I ever saw. Dreadful acting, a very poorly written screenplay and a complete lack of atmosphere and tension! The film only lasts 65 minutes and yet the first half hour is entirely wasted on stupid love-story intrigues and unexciting monologues. The setting in the legendary Cambodian city of Angkor surely could have resulted in a more compelling story but all we ever see are interior shots. The lead actress (Dorothy Stone, textbook blonde with curly hair and an ugly nose) irritated me enormously and I kept hoping a ravenous undead would suddenly appear out of nowhere to devour her. Unlucky again. If you manage to struggle yourself through 60 soporific minutes, you’ll be rewarded with a fairly decent finale. Still, this is far too little to give this film a positive rating, let alone a recommendation. Avoid! This is the type of movie you should only see in case you already saw everything else.