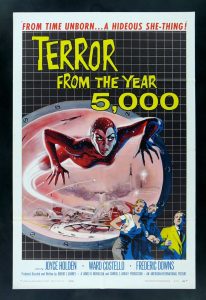 As far as I know, this is the first American feature film about time travel via a time machine. A time machine was featured in the American serial BRICK BRADFORD (1947) and in the English comedy TIME FLIES (1944). Film firsts should be noted and applauded even if the films they appear in are otherwise unremarkable. TERROR FROM THE YEAR 5000 is a somewhat lackluster production with uneven performances and direction. I say that this film is shade a better than most other low budget quickies from 1958 in that its story slightly more imaginative. The time machine was something new to films in 1958, the bit with the hypnotic finger nails is certainly unusual and don’t forget the four eyed mutant cat from the future. I thought the idea of having the future women at first mistakenly speaking Greek was a clever idea, since the present people had sent the future people with trinkets that had Greek writing on them. The make up for the future woman is quite poor, no wonder the director mostly kept her face hidden throughout. There is one scene where the scientists leave the island and go to a movie on the mainland. AIP studio heads must of come up with this scene to insert a little promotion. The film they go to see is AIP’s I WAS A TEENAGE FRANKENSTEIN. Oh, by the way, I like the 1958 Edsel Corsair that Ward Costello drives.