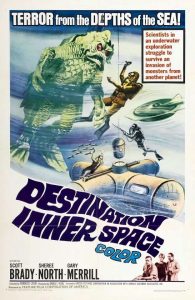 Watching “Destination Innerspace” again after so many years, one instantly notices how low this film’s budget must have been. Also upon re-inspection, a few new qualities emerge. Namely, the unintentional laughs. Previous reviews have already noted the outrageously tiny-looking miniatures, and how some of the music cues (borrowed from the B-classic “Angry Red Planet”) are not exactly subtle. Oh, and the sight of Gary Merrill trying to subdue a big, walking large-mouthed bass is certainly hard not to find amusing now. Such sad but funny indicators of low budget film-making aside though, what does still seem to work about this little movie is the premise: a monster preying on humans trapped in a confined space, which is basically how “Alien” works. Only here, we have an underwater facility “subbing” for the space tug Nostromo and being stuck on the ocean floor is not a bad setting if you’re making a claustrophobic thriller.