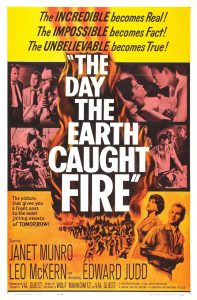 After more than forty years, this film is still a milestone in the science fiction genre. In its day, it was years ahead of its time. It had characters that acted like real people, instead of like John Agar and Lori Nelson. It contained a clearly implied sexual relationship between the two main characters, in an era when filmmakers were still routinely depicting even married couples as sleeping in separate beds. It was filled with shocking insinuations that the government is not all-wise and benevolent, that science doesn’t really have all the answers, that the military is capable of blunders that put new meaning into the phrase “friendly fire,” and that all may not be well, after all.

The film’s greatest strength is in its understated, matter-of-fact presentation of the characters’ various reactions to the relentlessly deteriorating situation. The performances are consistently honest and compelling, from the principal players down to the smallest walk-on parts. The award-winning script by Wolf Mankowitz is at times almost too clever for its own good. If there is one criticism that may be leveled against it, it is that most real people are not that consistently witty. Occasionally they are at a loss for words. Occasionally they say things that are lame, stupid, and altogether inappropriate. And this is the one element that was pretty much absent from the dialogue.

In an age when movies are being strangled to death by their own special effects, and character development often does not extend beyond the crudest bodily functions and four-letter expletives, it is genuinely refreshing to return to a film such as this one. Not only does it not rely on visual effects to tell its story, it is really so little dependent on the visual that it could have been equally successful as a radio drama (a forgotten art form nowadays), and might very well have caused an even greater panic than Orson Welles’ “War of the Worlds.”