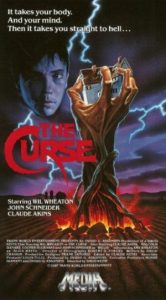 The Curse is a grotesque vision of H. P. Lovecraft’s “Colour out of Space.” Most Lovecraft adaptions suck (save the Gordon-Yuzna-Combs collaborations), but I happened to like this one. And it looks like I’m in the minority on that. Why do people hate this movie so much? Yes, it has flaws. David Keith’s direction isn’t great. He’s an extremely likable actor and he should stick to what he’s good at. I feel like the prologue part should have been saved for the epilogue. It would have been a fitting end, it was not a place to start. Some of the acting is also hammy, mostly the supporting cast. As actors go, Wil Wheaton does a fine job, as does his sister. And they’re the only characters you are supposed to care about. The mother character freaks me out as she changes during the film. Horror Director Lucio Fulci produced, and maybe influenced, this one. There are scenes of gore present that rival Fulci’s own. Not of the “flesh-ripping” variety, but of the “lets see what disgusting things we can do to food” type of gore. The Curse is not a film to eat during. I suggest that you ignore most of the comments, see the movie, and make your own decision as to whether it’s good or bad.