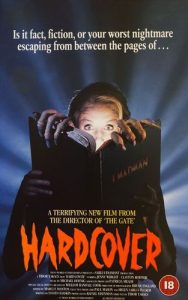 An young woman by the name of Virginia (Jenny Wright) is a fan of horror novels. She works in a used book store. When she reads a novel titled “I,Madman”, which is a non-fiction novel. The villain of the novel seems to come out of the book to stalk the young woman and killing the people she knows.

Directed by Tibor Takacs (The Gate 1 & 2) made an entertaining horror fantasy thriller with an sharp performance by the underrated actress-Wright. The film was barely released to theaters in 1989. The film went on to be a Cult Classic. Clayton Rohner (From “April’s Fools Day” and the T.V. Short-Lived Series “Good Vs. Evil” fame) co-star as a Police Detective. This is one of the most rarely seen and most underrated horror films of the late 80’s. See it. Written by David Chaskin (A Nightmare on Elm Street Part 2:Freddy’s Revenge, The Curse).