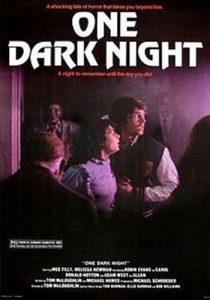 ONE DARK NIGHT is a highly overlooked and little known film from the early 80’s that deserves an audience that I fear it will never get, and that’s a damn shame. I have seen this film compared to others that have gotten a bigger name over the years, most notably PHANTASM, HELL NIGHT and MAUSOLEUM. This is a much different film than those and I don’t see the comparisons other than the mausoleum, which is a bit similar to the one in PHANTASM, but not enough to make any real comparisons. I’m not sure how this one slipped through without a broader acceptance. Maybe it’s all in the marketing, I don’t know. Perhaps a remake would breathe new life into it, unless Raymar drained all the life out of it that is. I’m not too big on all the remakes that are abundant these days, but I think they do work well with lesser known films (except for the awful GHOST SHIP remake, which other than the opening scene and Mudvayne’s Not Falling blaring, was utter crap). So if a remake of ONE DARK NIGHT would happen to fall into the right hands, I think it would make a lot of people go and watch the original. I know that’s what I do if there’s a remake of a film I haven’t seen before. So anything short of a remake, I fear, would not bring this film back to life. Unless, of course, Raymar got his eyes on it.

Anyways, ONE DARK NIGHT is a must see for horror fans, especially 80’s horror fans (’cause we all know that’s when the best horror movies were made). Creepy setting. Fairly good acting. Very good story. Campy.