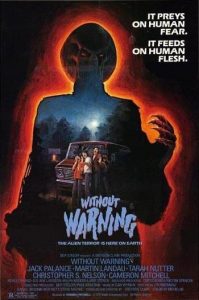 An alien has landed and it’s killing innocent humans! Why, you ask? If you’re looking for a feasible explanation like harvesting humans for food or cleaning off this planet for future alien use, forget it. Here the bad guy is just looking for a fun time hunting humans to add to his burgeoning trophy collection. Aiding in his sport are hairy, fanged little parasitic suction-cup Frisbees he flings at victims that drink their blood. The fun and gooey make-up FX are by Greg Cannon.

If the campy, silly plot isn’t enough to get you tuned in, keep in mind it costars Jack Palance as a grizzled gas station owner, Cameron Mitchell as a sadistic hunter and an out-of-control Martin Landau as a ranting, raving, insane Vietnam vet! David (NYPD BLUE) Caruso also puts in an early appearance and the alien is played by giant Kevin Peter Hall, who went on the play the monster in the PREDATOR films.