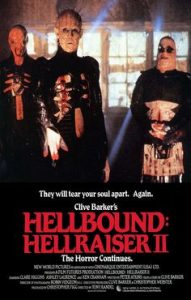 After the strange events of the first movie,Kirsty is sent to a Institution for the Mentally Sick, commanded by the mysterious Dr. Channard,a crazed psychologist who is willing to open the doors of hell by manipulating the Puzzle Box.In doing so,Channard brings Kirsty’s perverse stepmother Julia back to life,and consequently he provokes the rage of the dreadful cenobites,the cruel and evil creatures that give pleasure and pain in the same measure.Hellbound Hellraiser 2 is an extremely well-done film,thanks to the generous budget given to newcomer filmmaker Tony Randel and a first-rate production.The special effects are simply terrific (specially considering the time in which the movie was done,1988) and they create a bombastic,scary visual.I never saw a movie with such an incredible scenery and imagery,except maybe for Dark City.Clive Barker’s vision of hell is brought to life with mastery through the work of Randel and Director of Photography Robin Vidgeon. The plot sustains the tension and keeps you on the edge of your seat from start to finish,though the first half hour of Hellbound: Hellraiser II is a little bit slow and descriptive (but never boring); a great portion of the action and the terror is concentrated in the last minutes. The last thirty ones are a realistic and gutsy “tour de force” through fear,violence and suffering.This is definitively a masterpiece, but not for the squeamish.Hellbound: Hellraiser II is rated R for extreme violence and sex scenes,it runs 99 minutes(uncut version released by Anchor Bay).It stars Clare Higgins as Julia, Ashley Laurence as Kirsty, Imogen Boorman as Tiffany,William Hope as Kyle McRae and Kenneth Cranham as Dr. Channard.If you like this movie, you might also enjoy Phenomena and Suspiria.